Image is not biographical

Sulpitia Lodovica Cesis was an Italian composer and well-regarded lutenist who was born in Modena, Italy, in 1577. She was a nun at the convent of Saint Geminiano in Modena, although some scholars report it as Saint Agostino. Her only known work is a volume of eight-part Motetti Spirituali, which she wrote in 1619, although some scholars think it might have been written earlier than that because of its style. It is composed of 23 motets for 2–12 voices.

Her work is different than other works written at this time because it contains indications for instruments such as cornetts, trombones, violones, and archviolones. A bass part exists as well, which is interesting considering that this music was written for a group of cloistered nuns. One explanation is that this part was for the organ or viola da gamba.

Cesis dedicated her collection to another nun of the same name, Anna Maria Cesis, who lived at the Convent of Santa Lucia in Rome. Both Sulpitia Cesis’s and Anna Maria Cesis’s convents were well known for their music.—Excerpted from Wikipedia

The Cesis collection of Motetti spirituali is an important body of music both for the generally high quality of the works it contains and for the information it provides regarding performance practice in Italian convents in the early seventeenth century.—Excerpted from Alexander Street

Divas in the Convent 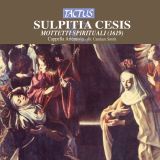