Violin Sonata in A major

Johann Paul von Westhoff was a German Baroque composer and violinist. One of the most important exponents of the Dresden violin school, he was among the highest ranked violinists of his day, and composed some of the earliest known music for solo violin. He worked as musician and composer as a member of Dresden’s Hofkapelle and at the Weimar court. Westhoff’s surviving music comprises seven works for violin and basso continuo and seven for solo violin, all published during his lifetime. More works, particularly a 1682 collection of solo violin music, are considered lost. His work, together with that of Heinrich Ignaz Franz Biber and Johann Jakob Walther, greatly influenced the subsequent generation of German violinists, and the six partitas for solo violin inspired Johann Sebastian Bach’s famous violin sonatas and partitas. He lived from 1656 to April, 17, 1705.—Excerpted from Wikipedia

The Instrumental Music of Schmeltzer, Biber, Muffat and Their Contemporaries 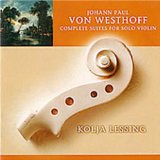