When you think of the great Dutch painter Johannes Vermeer you tend to think of  “Girl with a Pearl Earring,” probably his most famous painting. You might remember it was the inspiration of a pretty but underwhelming 2004 film of the same name with Scarlett Johansson and Colin Firth.

But I’m wondering if Hollywood wouldn’t have done better to make a movie about one of Vermeer’s lesser known paintings, “A Lady Seated at a Virginal.” Now that would have made for an intriguing film, because the young lady who is the subject of the painting is reminiscent of Leonora Duarte. 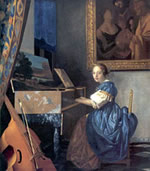 Duarte is an almost completely unknown Flemish composer whose few surviving works are sinfonias of lovely lyricism. It’s remarkable that any of her works have survived, since it was unusual for a woman in the mid-1600s to get her work published professionally and even more unusual if the woman was Jewish, as Duarte was, although her family had renounced their Judaism and converted to Catholicism, in name if not in practice.

It’s not believed that Vermeer personally knew Leonora or her family, but he likely knew of the Duartes through his relationship with Constantijn Huygens, arguably the most influential Dutchman of his time in matters of art and culture and a regular visitor to the Duarte household in Antwerp. In fact, it’s believed that Huygens brokered the purchase of  “A Lady Seated at a Virginal” to Leonora’s father, Gaspar, a wealthy merchant and art collector.

Gaspar was a notable musical talent in his own right, as was his wife, and indeed as were all four of the children.

The Duartes were fond of gathering together in the evenings to play music for their guests, making their home on the Meir the place to be. As one English visitor put it, “They make a fyne consort and harmony for luts, viols, virginals and voyces. I doubt not but you will fynde great contentement by hearing them.”

Home on the Meir

Leonora stood out in this musical family because of her talent for composition, which so impressed her father that he had some of her pieces professionally transcribed and published at his own expense.

It’s not certain, but it’s possible English composer John Bull helped Leonora give her music a professional polish by working with her on her writing.

In any case, Leonora was able to combine her native talent with the latest ideas in Italian and French music because of the rich traffic of visitors from all parts of Europe that regularly made it to the house on the Meir, including Dirk Sweelinck, son of Jan Pieterszoon Sweelinck, the Dutch composer whose work helped mark the transition between the Reniassance and Baroque periods of music.

So, if Leonora wasn’t the subject of Vermeer’s painting she night as well have been, because it depicts the world she lived in. And yet, as a musical talent of considerable gifts, she transcended that world and has given us, as unlikely as it is, the beautiful music of a young Jewish lady at the crossroads of culture at a rich time. That sounds like as great a summer project as any Hollywood filmmaker could wish for.—Nabob On Baroque

Credit to Adelheid Rech at Essential Vermeer and a paper by Victor Tunkel for much of this history.

You can sample Duarte’s music in this short sinfonia:

Two parts of Duarte’s 5-part sinfonia are included in this compilation on Jewish viol music.

Back to Point Against Point
Back to home page