“The oratorio, like the opera, was a child of the Baroque era. Giacomo Carissimi was the first master of the oratorio. He developed some of the conventions that were henceforth to govern that genre. With Carissimi, the oratorio began to take recognizable shape as a dramatized setting of a biblical (or some other form of sacred) text, for solo voices, chorus, and orchestra. But where earlier such dramas had been staged, those by Carissimi were among the first to dispense with scenery and costumes.”—David Ewen, The Complete Book of Classical Music

Giacomo Carissimi was an Italian composer. He is widely celebrated as a master of the early Baroque period or, more accurately, the Roman School of music. He is credited with further developing the recitative, introduced by Monteverdi, which is important to the history of dramatic music. He is also credited with further developing the chamber cantata, by which Carissimi superseded the concertato madrigals which had themselves replaced the madrigals of the late Renaissance, and with developing the oratorio, of which he was the first significant composer.

Carissimi’s position in the history of church, vocal and chamber music is somewhat similar to that of Francesco Cavalli in the history of opera. While Luigi Rossi was his predecessor in developing the chamber cantata, Carissimi was the composer who first made this form the vehicle for the most intellectual style of chamber music, a function which it continued to perform until the death of Alessandro Scarlatti, Emanuele d’Astorga, and Benedetto Marcello.

Of his oratorios, Jephte as probably his best known work, along with Jonas. These and other works are important for establishing the form of oratorio unaccompanied by dramatic action, which maintained its hold for 200 years. The name comes from their presentation at the Oratory of Santissimo Crocifisso in Rome. He may also be credited for having given greater variety and interest to the instrumental accompaniments of vocal compositions.

Carissimi was active at the time when secular music was about to usurp the dominance of sacred music in Italy. The change was decisive and permanent. When he began composing, the influence of the previous generations of Roman composers was still heavy, and when his career came to a close the operatic forms, as well as the instrumental secular forms, were predominant. He lived from April 18, 1605, to January 12, 1674.—Excerpted from Wikipedia 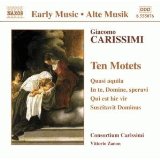