Harpsichord Concerto in A

Sonata No. 24 for Harpsichord

José António Carlos de Seixas was a Portuguese composer, the son of the cathedral organist, Francisco Vaz and Marcelina Nunes. He was was born in Coimbra and succeeded his father as organist in 1718 at age 14. Two years later he moved to Lisbon, where he gave harpsichord lessons and met Domenico Scarlatti who was living in Portugal from 1721 to 1728.

Seixas was influenced by the German Empfindsamer Stil (literally ‘sensitive style’). Much of his work was destroyed in the earthquake that devastated Lisbon in 1755. Only three orchestral pieces and around 100 keyboard sonatas survived, plus a handful of choral works for liturgical use (much more conservative than what one would expect from his instrumental music). He lived from June 11, 1704, to August 25, 1742.—Excerpted from Wikipedia 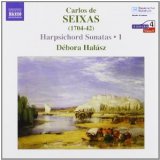