Giacomo Facco was an Italian Baroque violinist, conductor, and composer. One of the most famous Italian composers of his day, he was completely forgotten until 1962, when his work was discovered by composer, conductor, and musicologist Uberto Zanolli.

Facco wrote a cycle of twelve concertos for violin, strings, and organ with the title of Pensieri Adriarmonici (Thoughts Adriarmonicous), published in Amsterdam, the first book in 1716 and the second in 1718. He also wrote solo cantatas—on his own texts, for he was a skilled poet. these were found at the National Library of Paris, and were presented by soprano Betty Fabila for the first time (conducted by Uberto Zanolli) in 1962 at the Castle of Chapultepec in Mexico City.

Facco is believed to have composed numerous sacred works for the Royal Chapel in Madrid, but these appeared to have been destroyed, along with many other compositions, in the fire of 1734.

Much of the information about Facco’s life and works was discovered by Uberto Zanolli, an Italian-Mexican composer who found Facco’s Pensieri Adriarmonici at the Vizcain Library in Mexico City in 1962. Since then, Zanolli has worked on putting together a biography of Facco and a musicological recovery of his work. Facco lived from February 4, 1676, to February 16, 1753.—Excerpted from Wikipedia 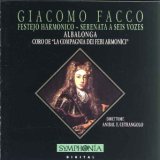 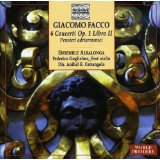