“The importance of this work in the history of music would be hard to overestimate. While later music theorists and analysts, such as Schenker, find this emphasis on chords to be destructive to the horizontal considerations that make a great work hold together, this work has influenced so many people that even those that do not even know his name but talk about root position chords and their inversions are invoking his concepts without realizing the source.”—Craig Matteson on Amazon

Jean-Philippe Rameau: His Life and Work

“OK, this is unquestionably a major book on Rameau, if not THE major work. So let’s get that out of the way. Masterful, scholarly, detailed and analytical, it’s a must. But, Rameau gave us more than most people know. First of all, he codified harmony for centuries to come. . . . The Baroque started with harmony in flux, and by the time it was over, there were certain progressions and cadences that had become established, and that still make sense today. . . .  And Rameau was the man who set it down. His treatises are hard reading, and I suspect still not fully understood. And here is a basic problem with Girdlestone. In such a thick book, 600 pages, how can you fail to even try [to talk about this]? He mentions that others have covered the subject, and backs out at the outset of a brief chapter in which he mainly teeters on the verge of calling Rameau a crank. And that is not very deep or adventurous for what aims to be a definitive book on Rameau.”—Fernand Raynaud on Amazon 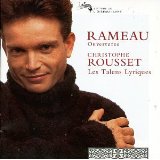 More on Rameau
Back to home page